Parametric testing can save a considerable 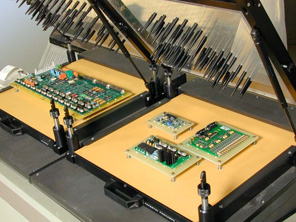 amount of product costs: it decreases repairs, eliminates defects which cannot be detected with a functional test, enables production technicians to autonomously screen for process faults and stabilize the quality in output, especially when functional test is not mandated. Seica solutions: Compact Line and Pilot Line.

A flying prober features a native peculiarity of being flexible. Sometimes, this solution too is faced with requirements of 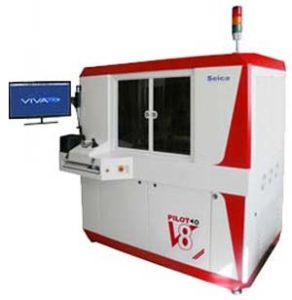 customization. The ATEs for components use the so-called ‘wafer interfaces’ (i.e. circular PCBs equipped with a micro-fixture) to contact the silicon wafer and test the component before packing. The testing of these micro-fixtures requires contacting terminals whose typical dimension is 50 microns. Of these points, continuity should be tested with the opposite side of the board, which appears as a standard PCB.

Thanks to its positioning accuracy and simultaneous probing on both sides of the board, the Pilot 4D V8 allowed to provide a solution featuring minimum customization.

In the latest years, LEDs have become widely used components, thanks to relevant technological innovations, not only as 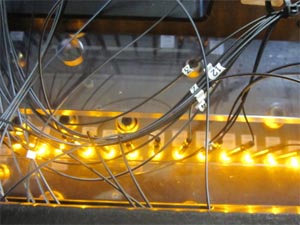 indicator light, but as a true light source. The world of electronics manufacturing is organizing both for mounting and testing, since there are relevant issues to be addressed, related to process and test as well. With this respect, driven by the challenging demands of automotive industry, the Seica testers have integrated the management of special sensors, capable of featuring the LED parameters, and guaranteeing the LED operation according to specifications.

We use cookies for the proper functioning of the website and to keep track of how you interact with it, so that we can offer you a better and personalized experience. We will use cookies only if you agree by clicking on "Accept all" or you can manage the preferences of individual cookies from the "Customize" section.
Privacy & Cookie Policy
Accept allReject allCustomize >

This site or the third-party tools integrated in it process personal data (eg navigation data, IP addresses) and make use of "Technical cookies" for the operation of our site and "analytical cookies" used by third parties to personalize content and advertisements. At any time it is possible to express or withdraw consent for the activation or deactivation of unnecessary cookies.

Necessary Always Enabled
Necessary cookies are absolutely essential for the website to function properly. These cookies ensure basic functionalities and security features of the website, anonymously.
Others
Other uncategorized cookies are those that are being analyzed and have not been classified into a category as yet.
Advertisement
Advertisement cookies are used to provide visitors with relevant ads and marketing campaigns. These cookies track visitors across websites and collect information to provide customized ads.
Analytics
Analytical cookies are used to understand how visitors interact with the website. These cookies help provide information on metrics the number of visitors, bounce rate, traffic source, etc.
Functional
Functional cookies help to perform certain functionalities like sharing the content of the website on social media platforms, collect feedbacks, and other third-party features.
Save & Accept
Powered by